A few months ago, kidlit writer Michelle Cusolito ran an online auction to benefit people in the Philippines affected by Typhoon Haiyan.  I offered a basic Twitter tutorial as an auction item, and will be meeting with the winning bidder this weekend!  In preparation for that, I put together a primer on how to get started on Twitter.  I call it “Twitter 100,” as it’s too basic to be even called “Twitter 101.”

It occurred to me that other people who have always wanted to learn more about Twitter may find these notes helpful, as well.  I am in no way an expert, but if you are a complete newbie and are toying with joining Twitter, I hope that some of this advice might be useful to you.

And so without further ado, I offer you…TWITTER 100:

Wait, what are Tweets?

Tweets from anyone you are following scroll by on your computer screen in a continuous “feed.”  I will talk about how to keep up with this (or not!) in a moment.

How do I start?

Your Twitter “handle” will begin with the “@” sign.  Your Twitter name can be different than your own. For example, you could be “@QueenOfTheUniverse” on Twitter if you’d like. Actually that’s probably already taken.  But you get the idea.  If you are an author looking to connect professionally, I suggest just using your straight up name, like this: @NancyTandon.  You want it to be easy for people to find you.

What should I include in my profile?

It might be helpful to play around on Twitter for a while and see what other people have in their profiles.  Some of them are quite clever!  A profile is your way of saying, ‘this is who I am,’ and will likely help you connect to like-minded people.  Since I use Twitter for most of my ‘professional’ networking, my profile says a lot about what kinds of things I write, and a little about me as a person. Here’s my example:

Also, definitely add a profile picture!  It doesn’t need to be fancy, just make sure you add one.  Otherwise, your profile picture will be an egg, which really isn’t good for anyone’s self-esteem, is it? 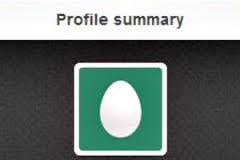 Don’t be an egghead.

How do I get followers?

The best way to get followers is to follow people yourself. Look for people you know in real life to get you started. In the search bar, type in a person’s name, or their “Twitter handle” if you know it. When their profile appears, click on the “follow” button.

You can follow anyone! President Obama? Yes! Agents? Editors? Yes, yes! It’s all a matter of what you’d like to see, and whom you’d like to connect with. In this way, Twitter is different from other social networking sights where someone must agree to let you see their posts.  (On Twitter, people you follow may not follow you back, but that’s okay, as long as what they say is interesting to you).

How do I keep my Twitter feed from getting overwhelming?

Once you start following people, you will begin to see a continuous “feed” of tweets on your screen. Naturally, the more people you follow, the more tweets you will see.

It is important to remember: you don’t have to read it all! Twitter is a fluid, “of the moment” way of communicating.  Also, you can easily create “lists” to categorize people you are following. Next to the blue “following” button on someone’s profile, there is a “down arrow.”  Click on that, and you will see a choice to “add or create lists.”

For example, I have a list called “kidlit writers.”  When I follow someone who writes kidlit, I add them to that list. Then, if I am feeling like I need inspiration or just want to connect specifically with people in that realm, I can pull up that list (this will be a button on your own profile page – “lists”) and read what’s being tweeted.

Also, you don’t want your time on Twitter to be a distraction from your real life and real work.  I usually spend from zero to 30 minutes a day looking at Twitter.  The average is about 10 minutes, and I always feel energized by the little clips and quips I read.  It’s not supposed to overwhelm you!

Anything! Sometimes I comment on what book I’m reading, or post links to writing contests.  It can be anything.  I use Twitter mostly in a ‘professional’ way but I always get responses when I say something more personal (i.e. comment about being frustrated with kids, etc.).  You can also “re-tweet” interesting tweets you read by simply clicking the symbol that looks like the recycling symbol, (but with two arrows instead of three.) This will send someone else’s tweet to the people who are following you.  It is a great way of broadening connections.

Often tweets will contain a link to a blog post, article, or other longer piece of interest.  You can simply highlight the URL of the item you want to link (the thing in the box at the top of the computer screen), then copy it (Command + C), and paste it (Command + V) into your tweet.  Sometimes, pasting a link will put you over your 140-character limit.  Thankfully, someone clever figured out a way to shorten those links.

How do I shorten a web address (link) so that it fits in my tweet?

The sight I like to use for this purpose is called bitly.com. First, start by highlighting the web address of the article or blog post you want to share. Then (as above) copy it by typing Command + C.

Now, open a new tab on your computer, and enter the address bitly.com. Once on bitly, you will see at the very top of the page a rectangle that says “paste a link to shorten it.” So, you paste your copied address here.  (Command + V). Then you click on the orange tab that says “Shorten.”

What happens is that you now have a shortened version of a link that will send readers to the content you wanted to share.  And now it’s time to put it back into your tweet.  You will notice that the orange “shorten” button is now a blue button that says “copy.”  So, click on that.

Then, go back to your twitter page, and paste the new link into your tweet. Hooray! You did it!

What is a “hashtag”?

The # (hashtag) symbol on Twitter basically identifies a “topic of conversation.” For example, adding #amwriting to a tweet would let people know your tweet is related to something about the writing process, e.g.:

Ugh! I just can’t get my latest revision to flow! #amwriting

You can search for “topics of conversation” in the search bar by entering # (followed by whatever you’re interested in.)  Some great ones to look at specific to writing are:

What are some other ways to connect with people?

1. You can “favorite” a tweet by clicking on the “star” icon under a tweet. This is akin to “liking” something on Facebook. It lets the author of the tweet know you agree or like what they’re saying.  I also tend to “favorite” tweets about books I’d like to read, so I don’t forget the title.  On your home (profile) page you can easily see tweets you have favorited (by clicking on the ‘favorites’ tab).

2. You can reply directly to a tweet by hitting the ‘reply’ icon. This will start a ‘conversation’ between you and the tweeter.

3. You can DM (Direct Message) someone on Twitter by clicking on the same “down arrow” that you use to create lists. There is an option that says, “send a direct message.”  This will be seen by that one person only, not all your followers.

You can also do this by starting a tweet with someone’s handle, for example:

This tweet, however, would be seen by anyone who follows both you and the @person.  If you want to mention someone and have everyone see it, put a period before their name, like this:

Or you can simple ‘embed’ someone’s name in your tweet.  For example:

Thanks @NancyTandon for thoroughly confusing me with all this Twitter mumbo-jumbo!

The person you mention will be notified that they were “mentioned in a tweet,” and a connection is made.

4. Chats. Sometimes there are specific “chats” that occur on Twitter that you can follow along with and/or participate in.  It’s not a formal thing, you don’t have to “belong” to a group to participate in a “chat.” For example, on Tuesdays at 9:00 PM there is something called, “#kidlitchat.”  It can be very fun to pour a glass of wine, open Twitter, type #kidlitchat into the search bar, and follow along with what people are talking about that week.  Usually there is a moderator who offers a starting topic or question. If you want to participate, you simply write a comment as a tweet, and end with #kidlitchat.  The other people will see it in their feed if they are following that ‘hashtag.’ Clear as mud?  Just let it flow over you for a while, you will get the hang of it!!

RT = Retweet.  This is used when you share someone else’s tweet that you thought would be interesting to your followers.

MT = “Modified tweet.”  You are sharing something someone else tweeted, but you’re adding a little bit of info yourself.

ICYMI = in case you missed it

If you find yourself confused by something on Twitter, just Google your question, e.g. “What does RT mean on Twitter?”  Guaranteed someone else has asked before you (probably me).

With all this said, I must point out that Twitter is not for everyone. If you play around with it for a while and realize you are not enjoying yourself, stop!  No need to add to your already full plate. Maybe there is some other social media platform that is better suited to you.  (Or none at all!).  It’s okay!!

But if you love one-liners, and connecting with like-minded people, and sharing ideas, and being inspired, and learning new things, and you don’t mind “putting yourself out there” a little bit, Twitter just might be the perfect fit for you!