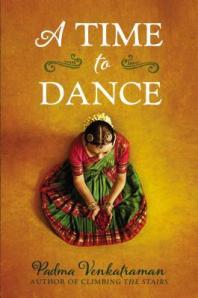 Have you ever read a story and wished you could ask the author questions about it? That is what happened to me while reading A TIME TO DANCE by Padma Venkatraman. And guess what? My wish came true! A hearty welcome today to Ms. Venkatraman, who graciously agreed to give us a behind the scenes peek at how this beautiful book came to be.

First, a bit about the story itself. Here is an overview, from Goodreads:

“Padma Venkatraman’s inspiring story of a young girl’s struggle to regain her passion and find a new peace is told lyrically through verse that captures the beauty and mystery of India and the ancient bharatanatyam dance form. This is a stunning novel about spiritual awakening, the power of art, and above all, the courage and resilience of the human spirit.

Veda, a classical dance prodigy in India, lives and breathes dance—so when an accident leaves her a below-knee amputee, her dreams are shattered. For a girl who’s grown used to receiving applause for her dance prowess and flexibility, adjusting to a prosthetic leg is painful and humbling. But Veda refuses to let her disability rob her of her dreams, and she starts all over again, taking beginner classes with the youngest dancers. Then Veda meets Govinda, a young man who approaches dance as a spiritual pursuit. As their relationship deepens, Veda reconnects with the world around her, and begins to discover who she is and what dance truly means to her.”

Bharatamatyam is a classical dance form of South India. Here’s an example:

As I read A TIME TO DANCE I was especially carried away by the description of the dancing itself. So, the first question I asked was:

Nancy: What is your experience with Bharatanatyam dance? As I was reading, I was guessing you must have personal experience. Am I right?

Padma: Many little girls learn Bharatanatyam in India, just as many girls in the West take Ballet lessons. I was took lessons from a few different teachers, off and on. More off than on, actually! I sort of have 2 left feet and while I did play the veena (and learned the Carnatic style of music that accompanies Bharatanatyam) I have zero kinesthetic ability. My sense of rhythm stays in my head and can make its way to my fingertips, but doesn’t travel to my feet, I’m afraid! Then again, having dabbled in it, I can appreciate what it takes to become a great dancer and my flirtation with dance informs Veda’s serious pursuit of it. 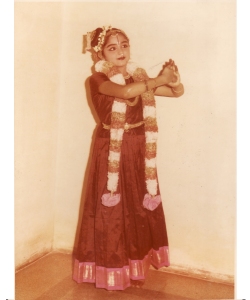 I loved the relationship between the main character, Veda, and her grandma (Paati). I loved how Paati took the time to make Veda a hot snack after school. A small gesture that tells you a lot about how much the grandma cares for her granddaughter. I also really wanted to know:
Nancy: What exactly is the snack that Paati makes for Veda? It made my mouth water without even knowing the details.
Padma: Sojji is sweetened semolina. Here’s a link to the recipe and  a photograph that I found on the web:http://www.foodandthefabulous.com/dessert/semolina-soji-childhood-memories-masterchef-sa-week-4/.
[Note: Yum!]
Another special thing about this novel is that it is written in verse, which means it reads like a long, narrative poem. It’s a very impressive writing style, and this story seems so well suited to it. So, I asked:
Nancy: Did you always intend to tell this story in verse? Or did it start out differently?
Padma: The glib – yet true – answer is that Veda’s character spoke to me, I heard verse.

I call that answer glib, because, for me, hearing the voice and being possessed by a character is incredibly important. It’s everything. BUT, editing is also everything – and that begins with self-editing.

I fought against writing A TIME TO DANCE in the verse form because although I love and read poetry, I’ve never studied it. Luckily for me, Richard Blanco (who later read at President Obama’s inauguration) let me sit in on a poetry workshop he was doing at the University of Rhode Island’s Ocean State Summer Writing Conference, and his friendship and faith in my ability helped me overcome my fear of experimenting with this form. Many other modern award-winning poets who are also academics, helped and encouraged me: Scott Hightower, Peter Covino, and Peter Johnson also encouraged me.

My editor, Nancy Paulsen, is a self-confessed “fan” of the verse novel, I believe. So she was a stalwart supporter and stood by me through numerous revisions. She was very excited about this work and encouraged me strongly to experiment with this form.

Finally, as I was revising my work, I realized that this form is particularly well suited to two of the three main themes in this story: Veda’s love of dance and her spiritual awakening. A character’s spiritual growth is incredibly hard to write in verse. It’s virtually impossible to capture in straight out prose – or was, for me, for Veda. Spiritual growth – and the power of art – especially of dance – two key themes in A TIME TO DANCE – go beautifully with verse.

Nancy: I was very interested in all the religous elements of the story. You don’t always see a lot of spirituality in books for this age level. Did you get any push-back against including these details from your agent/editor/others?

My agent, Rob Weisbach, is an incredible ally. He admitted he was scared when he saw the word “God” on the first page, because few writers dare to approach this topic. He said it was damnably hard to write spirituality without coming off as religiously bigoted or proselytizing – and he’s right. But he said, even in the draft phase, that I had pulled it off – and he had nothing but praise for this aspect of the book. He never once suggested that I should tone down this core aspect – and he pointed out something that’s very important.

While Veda’s spiritual awakening is grounded in the religion to which she’s been exposed, the book is not religious; it’s spiritual. Her awakening is universal, not limited to one particular context. The novel is, in no way, trying to push a particular religion – in fact, if anything, Veda’s philosophy is based on acceptance. The title is a Biblical quote (Ecclesiastes) – a quote that has significant meaning to Veda.

An editor whom I deeply trust, Stephen Roxburgh, also read a draft, and his belief that I should and, moreover, could, pull off the spiritual aspect of Veda’s story, was vital. He called A TIME TO DANCE the “La Vita Nuova” of Bharatanatyam. La Vita Nuova is a text by Dante Allegheri, and in it, the main character progresses through different stages of love/understanding, as Veda does, maturing from Eros to Charis to Agape.

Stephen’s note was something I looked at every time I felt scared. Writing a story that touches on spiritual grown is one of the hardest things to do – for any age group. For the younger audience, it’s even harder, I think. Especially if the spiritual growth occurs in a character whose religion isn’t part of the mainstream. But Stephen’s encouragement kept me going, looking ahead, listening to Veda, seeing AT TIME TO DANCE play out in my mind’s eye, allowing her and the other characters to possess me.

It took years to write this novel right. And my own editor, Nancy Paulsen, as I’ve said earlier, was immensely patient. Her patience is truly unparalleled and it is amazing to have someone like her to help me polish my work and make it shine.

But after it was done, I was, frankly, terrified. It was really a tremendous relief that A TIME TO DANCE was released to starred reviews in 5 journals: Kirkus and Booklist and VOYA and SLJ and BCCB. And I am thrilled that so many newspapers carried glowing reviews. I’m also delighted to share the recent great news that it’s a Booklist Top 10 art book for youth!

Nancy: Even though Veda has experienced a horrific life-changing event, I love how you wrote so many typical problems into her world via her crushes on two different guys, including Jim who fits her prosthesis (and is basically her physical therapist). Was the program Jim was working through to help people in India be fitted for limbs based on a real group you know about?

Padma: I spoke to several disabled people, physical therapists, doctors, and physiatrists when I wrote the novel. I went “method” the way actors sometimes do – and spent a lot of time doing experiments to simulate the tactile illusion of a phantom limb, using crutches, etc. In my late teens, I narrowly escaped the loss of a leg, so I guess in some ways Veda’s experience was nearer to my heart that I realized, until I wrote the book. All this to say, Jim’s character is inspired by several Americans whom I met, who volunteer to travel to other countries to help with the making of prostheses. And, when I visited India, I did come across many programs to aid socio-economically deprived people who were, among other things, disabled. But I saw several groups of people in India and elsewhere, who inspired me. I can’t point to just one person or one group. Then again, Robert C. James and his son Josh James, who create artificial limbs in my home (Rhode Island), gave me more time than probably anyone else did – so, in part to honor them, I named my character Jim.

For more information on the novel, a free downloadable discussion guide, and lesson plans, please visit Padma’s author website: www.padmasbooks.com. Also, check out her other titles, including: ISLAND’S END and CLIMBING THE STAIRS. 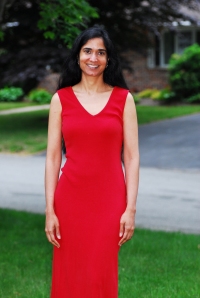 Thank you for your time and for sharing your process with us, Padma! I encourage all readers to make time for A TIME TO DANCE. It’s gorgeous.