I went into the bookstore last summer to get:

“A blind French girl and a German boy’s paths collide in occupied France as both try to survive the devastation of World War II.”

I walked through the aisles muttering, “Don’t get The Light Between Oceans.” (I’d already listened to that as an audio book.) “Not Between Oceans,” I repeated.

A young couple’s happiness is marred only by their inability to start a family. When a rowboat with a dead man and infant girl mysteriously washes ashore, they consider making a choice with devastating consequences.

I ran into a friend. We talked book clubs and recent favorites. “Oh, The Light Between Oceans is wonderful,” I gushed. And she gushed back, “I just know you will love All the Light We Cannot See.”

Finally it was time to make my purchase. When I got home I started reading. Right away something felt off. I had heard this book was about World War Two, and included a blind girl as a protagonist. But the time period was more modern, and the girl was not there. And that is because in my quest to avoid the light between the oceans, I ended up with: 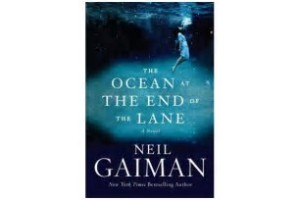 “An unnamed man returns to his hometown for a funeral and remembers events that began forty years earlier.”

One year later, I’ve at long last gotten to the first book, my original destination. Some journeys are like that. You don’t always go directly where you’d intended to, but along the way you might meet some really great characters.

I do recommend all of these books. Just don’t go into the bookstore and ask for “the blue and black one.”

8 thoughts on “The End of the Ocean Light”