Breaking news:  Boy reads book without pictures or potty humor – and likes it!  “I think this is going to be my new favorite series,” says Boy, age 9. “I’m excited because [the book] actually took me longer than a day to read.”

Related news:  Mom is knocked over by feather; faints.

What is this magic that has entered my home and swept away my son and his imagination? Friends, I give you:

From the jacket flap: “Jennifer A. Nielsen has woven a heart-racing tale full of danger and bold adventure, lies and deadly truths that will keep readers on the edge of their seats.”  True, all of it, true!

I have written in the past about my struggle to find the right books for my capable but reluctant reader.  Since my son was between books (because, you know, everything he ‘liked’ took him less than a day to read), I suggested we start this one together.

“No thanks,” he said, looking at the cover and not seeing any underpants.

“Okay, well, I’m going to read chapter one right now.  Why don’t you come sit next to me and just give a listen?  You can leave whenever you want,” I said.  (There may have been a sleeve of Girl Scout cookies near me as well, but I swear I didn’t mean it as a bribe).

He begrudgingly agreed.  On page 2, I read, “The butcher gave me one final kick in the side, then leaned low toward me. ‘If you ever come into my shop again, I’ll cut you up and sell you as meat at the market.  Got it?'”   That’s when my son sat up a little straighter and said, “Oh.  This is a really good book.”

And that is how our adventure with THE FALSE PRINCE began.  The story, the first in Nielsen’s Ascendance Trilogy, is a medieval adventure with swords, plot twists, dungeons, and more plot twists.  It had been awhile since I’d read something aloud to my son, and it was so fun to share our reactions when surprises popped up.  In the end, he finished reading the book on his own because he couldn’t wait for the next bedtime to keep reading the story.

This type of fantasy/adventure is not typically a genre I gravitate to, but in this case, I’m so glad I did.  (Special thank you to Librarian Friend #2 for the loan).  I highly recommend THE FALSE PRINCE to any writers looking for good examples of world-building.  Nielsen hits the mark with this one.

Additional related news:  Mom trips over self on the way to the bookstore to purchase Book Two of the Ascendance Trilogy, THE RUNAWAY KING.

How bad could the storm possibly have been, I wondered, as I read the first pages of Donn Fendler’s fantastically exciting memoir, Lost Trail.  (Down East Books, 2011)  Then five days ago, Sandy blew in with her hurricane force tropical tempest, and I realized how anxious bad weather can make us.  Even though I was safe in my home, miles and miles from the storm’s true path, my heart was racing and my ability to prioritize real vs. imagined danger was compromised.

So, in that moment, it was easier for me to imagine how a 12-year-old Donn Fendler from New York felt when a storm blew in as he summited Mt. Katahdin 73 years ago ago.

When Donn went on a fishing trip with his father and a group of friends in the northern Maine woods in the summer of 1939, the only care on his mind was finding the best fishing spot.  He never imagined he’d soon be in a race for his life.

Lost Trail is the true story of Donn’s 9-day adventure and struggle for survival alone on Mt. Katahdin, with nothing but the clothes on his back.  It is an exciting, page turning, uplifting story, which has been retold in a fantastic graphic novel format with Lynn Plourde.  The amazingly talented illustrator, Ben Bishop, has rendered the story with pen strokes that seem to grab the urgency of the situation and pull you into the story.

The story alone had me reading at a frantic pace, but the kicker is the actual newspaper articles and clippings from the Bangor Daily News, which chronicle the swell of people who surged in to help, and their trickling departure when it seemed all hope was lost.  I couldn’t imagine what Donn’s parents were thinking and feeling the day that the News reported: “Boy’s Body Likely Found.”

Of course, since he tells the story himself, you know the ending is a happy one: 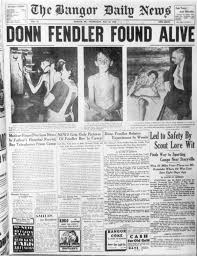 Mr. Fendler now splits his time between Tennessee and Maine.  Through the years he has told his survival tale countless times, including in the 1939 book Lost on a Mountain in Maine by Joseph B. Egan (HarperCollins), which I’ll likely check out now for my son and I to read.

If you’re like me, you struggle with whether graphic novels are “really” books that your kids can “really” put on their reading log for school.  Since he was tiny, my son has always gravitated toward anything resembling a comic.  I remember snuggling my then two-year-old, wanting to read The Very Lonely Firefly, but instead reading something like:  and then with his last mortal breath, Dr. Mentor slashed the antidote from the wretched hands of the evil bomb maker…ROARRRRR screamed Hulk, his sinewy muscles snapping….

I’ll tell you what, those ‘graphic novels’ often have some pretty juicy vocabulary. Lost Trail is no exception.   The story is uber-compelling, and this re-telling is a guaranteed slam-dunk in any 8-10 year-old’s arsenal,  reluctant reader or not!