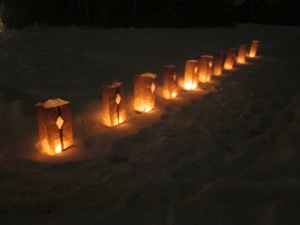 Last weekend was a difficult one for all of us.  The one year anniversary of the shootings at Sandy Hook Elementary brought up emotions and memories that painfully juxtaposed against the normally joyful holiday bustle.   Images of angelic faces and devastated families swirled around me all day.  But I didn’t need a reminder to be thinking of the Sandy Hook community, because I haven’t stopped thinking about them.  I don’t think any of us have.  It’s like the whole world has reached out our arms to give one big giant hug to the grieving.  I hope they feel it.

My community, also a “small Connecticut town,” organized an event that encouraged the lighting of luminaries on December 14th.  We participated and I found the experience very soothing.  With my oldest, who is aware of some of the details of the tragedy, I slowly scooped sand into 26 bags.  As we carefully placed in tea lights, I brought up specific names as their faces flashed before me.  Snow was falling as we placed the luminaries outside, and I lifted up my face to feel the tiny pings, the gentle reminder of the cycle of the seasons, and life.  Snowflakes have become a symbol of hope and healing in Newtown, CT, and I like to think that maybe it wasn’t a coincidence that it was snowing in CT that day.

To show support and encourage healing, Newbery medalist Patricia MacLachlan and illustrator Steven Kellogg used the symbol of the snowflake to craft their beautiful picture book:

SNOWFLAKES FALL was written in response to last year’s tragedy.  It is a gorgeous book with a healing message.  From the publisher’s website (Random House):

“In Snowflakes Fall, Newbery Medalist Patricia MacLachlan and award-winning artist Steven Kellogg portray life’s natural cycle: its beauty, its joy, and its sorrow. Together, the words and pictures offer the promise of renewal that can be found in our lives—snowflakes fall, and return again as raindrops so that flowers can grow.

MacLachlan and Kellogg, who are longtime friends, were moved to collaborate on a message of hope for children and their families following the tragic events in Sandy Hook, Connecticut, on December 14, 2012. Kellogg lived in Sandy Hook for thirty-five years—he raised his family there and was an active member of the community. With Snowflakes Fall, they have created a truly inspiring picture book that is both a celebration of life and a tribute to the qualities that make each individual unique.

In honor of the community of Sandy Hook and Newtown, Random House, the publisher of Snowflakes Fall, has made a donation to the Sandy Hook School Support Fund. Random House is also donating 25,000 new books to the national literacy organization First Book in the community’s honor and in support of children everywhere.”

Error: Twitter did not respond. Please wait a few minutes and refresh this page.